Is It All Vanity? 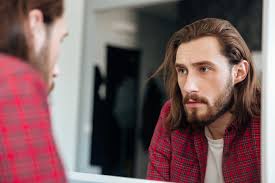 Jen’s Gem:  Be yourself. Everyone else is taken.

I’ve been seeing a lot of ads for products promising to help you look younger. Perhaps it is my advancing age that has triggered this onslaught. Or it may be simply due to an inadvertent click in my newsfeed that has set the algorithms on fire.

I’ve been seeing a lot of ads for products promising to help you look younger. Perhaps it is my advancing age that has triggered this onslaught. Or it may be simply due to an inadvertent click in my newsfeed that has set the algorithms on fire.

This past week, the changing season and its associated debris flying around did a number on my eyes. At first it could be hidden with strategically applied concealer. Yet as the days progressed and my peepers became more irritated, red, and swollen, a trip to the doctor was in order.

“Contact dermatitis” was the diagnosis. Creams and drops were prescribed and within a few hours of application, I could see a huge improvement. Today, it’s barely noticeable. However, during the throes of the attack, I avoided the mirror. I avoided attending events.

“I couldn’t possibly let people see me like this! What will they think?”

Ahh vanity. King Solomon summed up his view of life in this one word. Everything is vanity. (Ecclesiastes 1) This begs a few questions for us to consider:

These are big fat whopping questions to ask ourselves, requiring a fair amount of contemplation. However, I suspect, if we invest the time and attention to their responses, like King Solomon –  the wisest person who ever lived – we may identify the root of some of our troubles. More importantly, we may get closer to living God’s plan for our lives.

In Jesus’ time, He repeatedly called out the religious sect for their vanity. The Pharisees wanted everyone to see them as “oh so holy” yet their treatment of others was horrific, certainly not befitting a “man of the cloth.” They cared more about their appearance and their status as Biblical scholars than they did of the people they were supposed to serve. God is not a fan of putting on appearances or hypocrisy.

“If anyone thinks they are something when they are not, they deceive themselves.” (Galatians 6:3 NIV)

God likes real. He likes authenticity and integrity. He’s a proponent of aligning your words with your actions. The whole living to please others – or to please yourself – yeah, not so much.

Not once in the Bible do we see Jesus checking His appearance in the mirror or stopping at the local shop to pick up the latest fashion or trinket. It was not his attire or sweet smell that drew people to Him.

It was His love, compassion, and healing that served as the magnet that filled  temples to overflowing. What you saw was what you got. Because of this, many people trusted Him and believed He was who He said He was.

Oh there were those who didn’t that’s for sure. Still are. Yet as the very veil of the temple was ripped from top to bottom and the earth shook violently and the sky turned black at His death, many changed their minds.

“So when the centurion and those with him, who were guarding Jesus, saw the earthquake and the things that had happened, they feared greatly, saying, “Truly this was the Son of God!” “(Matthew 27:54 NKJV)

Jesus was not afraid to show people who He really was. He did not consult a stylist to ensure He had the right look before speaking in front of thousands. He did not walk around contemplating whether His preaching would offend people. He did not water down His message to please others.

He lived for an audience of One. His Father.

He lived to fulfill His purpose – to show people the way to heaven. To break the chains of sickness and death, to free people from people-pleasing and approval seeking. King Solomon understood this perfectly (though it took him the entire book of Ecclesiastes to figure it out!) We would we wise to attend to his words:

“Let us hear the conclusion of the whole matter: Fear God and keep His commandments, For this is man’s all.” (Ecclesiastes 12:13 NKJV)

Our looks will fade, but our character remains forever. The world is desperately seeking people with character, not concealer.

What will we choose to put on today?